Environmental Science Center Board of Directors 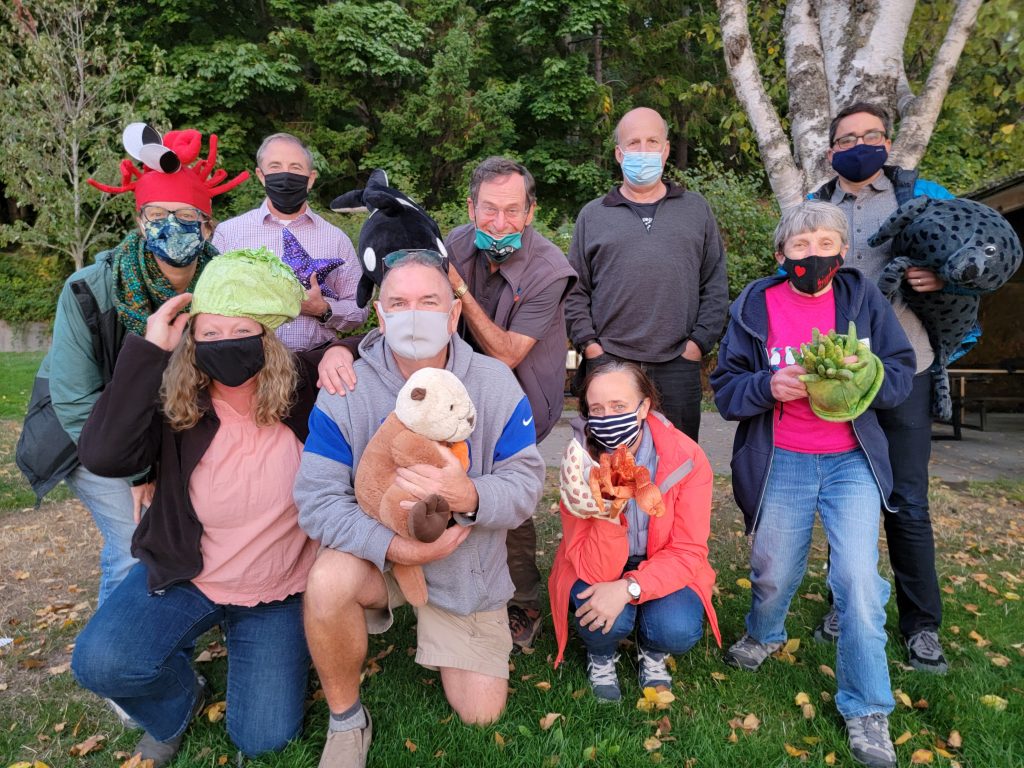 Interested in joining the board? Visit the Become a Board Member page  What does being an ESC board member entail?  Find out in the Online Board Orientation Manual.

Karl Mejia, President, is currently the Chief Executive Officer of JL Darling, makers of the Rite in the Rain brand of weatherproof stationery products based in Tacoma, WA.  Prior to JL Darling, Karl spent 18+ years in a variety of industries including Housewares, Food Manufacturing and Energy.  Karl graduated from the University of Notre Dame with a degree in Geological Sciences and followed that with a MS in Geology from Texas A&M University.  After 5+ years as a professional Geologist, Karl returned to school for an MBA in Marketing and General Management from the McCombs School of Business at the University of Texas.   Karl is married and has two rambunctious boys who love to explore our neighborhood treasure, Seahurst Park.

Nicole Killebrew, Vice President has a B.S. in Marine Biology and an M.S. in Environmental Education, Leadership and Ecological Literacy. She has been with ESC since 2004.  Nicole also holds a position as Interpretation Coordinator, Staff Diver, and Volunteer Trainer at the Seattle Aquarium since 2002. Nicole serves as Regional Leader for the National Network for Ocean and Climate Change Interpreters and is an Environmental Leadership Program Senior Fellow. At ESC, she assists with the development and facilitation of in-school and after school science curriculum, trains staff and volunteer naturalists, and teaches field programs.  Nicole serves on the ESC Governance Committee. She finds inspiration in serving the communities of South King County; sharing the wonders of the Salish Sea with learners of all ages.

Treasurer, Steve Buchsbaum’s passion is to harness science and technology to improve people’s lives and create long-lasting, wide-spread impact “To do the most good, for the most people, while having as much fun as possible.”  Steve lives in Burien Washington with his wife Lori and son Max.

Steve has worked in various sectors and organizations – academic, private, government, philanthropic – in many cases helping to launch new organizations or working in existing organizations during extraordinary times.  His career has spanned roles ranging from research scientist, consultant, project manager and business development lead to funder, team leader, director and board member.  Most recently, Steve retired from the Bill and Melinda Gates Foundation after 15 years launching and leading the Grand Challenges Program, transforming it from an initial $500M investment to an ongoing global coalition of innovation programs sponsored by governments and philanthropies around the world.

Brenda Sullivan, Secretary, studied at London University (B.S. in Physics) and the University of Southampton (M.S. in Acoustics).  After graduate studies at the University of Southampton, she came to the United States to work in community noise and psychoacoustics research at MAN-Acoutics and Noise in Seattle.  After a period as a software engineer at the University of Washington and Bruce Franklin, Inc, she moved to Virginia, where she worked as a research engineer in psychoacoustics at NASA for 25 years.  On retiring from NASA, she returned to the Pacific Northwest, where she enjoys the environment and the weather.  She has a lifelong interest in music and has played clarinet in many groups, large and small, and currently performs with the Orchestra of Flight and the West Seattle Community Orchestras.

Meg Alley, grew up in northwest Montana, and after graduating with a degree in English Literature and Creative Writing, started her nonprofit career with an environmental organization in Cleveland, Ohio. Over the last fifteen years, Meg has worked in fundraising for arts, education, and social services organizations, writing grants, coordinating events, and working one on one with donors. Meg holds a certificate in Fundraising Management from the University of Washington and is a member of the Puget Sound Grantwriters Association and Association of Fundraising Professionals.  In her free time, Meg can usually be found with her nose in a book, in the kitchen attempting a new baking challenge, or exploring Seahurst Beach, along with her husband, three-year-old son, and two dogs.

Orian Grant, (they/them), has long felt a connection to communities and the environment coming from rural Xenia, Ohio. While studying sustainability and environmental science at Pacific Lutheran University, they assumed a position as Sustainability Coordinator in 2011. This experience emphasized the intrinsic connection between our food systems, water and our global oceans. Since then, Orian has committed 15 years working in environmental and marine science through STEM and outdoor education and 12 years of permaculture and landscaping design

Applying these skills in 2020, Orian co-founded a BIPOC urban farming organization titled Black Star Farmer, with their experience providing insight into the programming and mission development. In addition, Orian serves a position on the ESC Governance Committee and Front & Centered Community Engagement Committee

Don Hunsaker III was born in Del Rio, Texas and raised in San Diego, California. He finished high school in Bogotá, Colombia, South America. Don lived in Colombia for 7 years in the 1970’s where he held a variety of jobs such as bricklayer, tractor driver and farmer.  He also established a primate research center and gallery forest conservation easements in Colombia, which were taken over by FARC in 1980.  Back in the US, he became a journeyman carpenter, General Contractor/Landscape Contractor and company owner.  In southern California, Don became an expert on native habitat restoration, specializing in riparian habitat; he was an open space preserve manager and mitigation specialist.  Don collaborated on environmental education and community service programs for grades 3-12 with local governments and agencies.  In 2016 Don received a BA degree in Anthropology (summa cum laude with distinction) with a focus on Environmental and Cultural Anthropology from San Diego State University. He is currently a volunteer Cedar River and Beach Naturalist for the Seattle Aquarium.

Lawrence Reymann, returned to teaching at Eastside Catholic High School in 2003 after a three-decade career with Columbia Records.  This change allowed him to utilize his M.A. in American Literature from Marquette University. An emphasis on environmental community service has led him to work as a Beach Captain with the Seattle Aquarium’s Beach Naturalists Program for well over a decade, then as the Lead Instructor for summer camps at Highline Community College’s Marine and Science Technology Center. Larry has worked as an ESC Instructor for​more than 10 years, worked with the Aquarium’s Citizen Science Program for seven years, and as an educator for Salmon Field Labs along the Cedar River. Additionally, he serves on Renton’s Community Services/Parks Commission, volunteers as a King County Park Ambassador for May Creek, a Salmon Watcher on May Creek since 2004 (documenting an unexpected run of kokanee salmon there in 2011), travels to Haiti annually to work with Ste. Anne d’ Hyacinth Parish and School in a mountain village there, and is a team leader with the Cedar River Naturalists’ Cedar River Salmon Journey Program for over a decade and counting. After serving as Board President at ESC for four years, Larry has segued back to the Board as President Emeritus. For the last three years, Larry has served on Seattle Public Utilities’ Adaptive Management Work Group, coordinating salmon recovery on the Cedar River with Federal, Tribal, County and Seattle Representatives. In his spare time, he gardens.

Kathy Humphrey has more than 30 years of experience in marketing and communications in the U.S and Europe for corporations, government agencies, and non-profit organizations. She has served on the boards of several non-profit organizations in the Seattle area and as docent and volunteer scuba diver for the Seattle Aquarium. She holds a B.S. in Computer Science from Duke University and M.Ed in Curriculum and Instruction from Pennsylvania State University. She now focuses on supporting elementary after-school programs and to her role as part-owner of Copperworks Distilling Company. She’s often outdoors hiking and kayaking or at a bluegrass festival playing stand-up bass and singing

Roger Ullman, graduated from the U.S. Naval Academy with a B.S. in Oceanography before serving over 30 years in the military where he had the privilege to lead multifunctional teams developing and implementing innovative solutions to complex international problems.  An Olmsted Scholar, he has an M.S. in International Relations from Sciences Po and an M.A. in Strategy and Research from the Sorbonne, both in Paris.  Prior to returning to his wife’s hometown of West Seattle, he was assigned as the Naval Attaché in Paris, France.  He is convinced the principal challenges that confront the planet are in the sustainability sector – specifically, the imperative to address climate change by mobilizing diverse skills and global resources.  The ESC’s mission aligns well with his objectives for this “Next Chapter”.