Thanks to funding from the NOAA B-WET program, we had some direct connections with scientists from the National Oceanic and Atmospheric Administration! Our Salmon Heroes students were able to ask them additional salmon questions that didn’t get answered during our program. View some questions and answers below:

All salmon are not endangered, though most Pacific salmon runs in WA, OR, and ID are. Atlantic Salmon are also listed under the Endangered Species Act in Maine and used to be present in other New England States. Salmon that return to Alaska are not endangered and make up most of the Pacific Salmon you can buy at the grocery store. There are many human-caused reasons that salmon have become endangered on both US coasts: pollution, habitat loss, overfishing, impassable barriers (dams and culverts) to name a few.

Why are salmon still in decline if there are so many laws put in place to protect them? – Renton High School student

So far the laws put in place to protect them are a good start, but there are more reasons for their decline than the laws have been able to address.  It’s the combination of all of the pressures that is bringing about the decline (including hatcheries, the hydropower system, harvest, and habitat degradation).  Additionally, some laws may not be well enforced, and some laws may not be strict enough.  Depending on which specific salmon run in consideration, various of these reasons will play greater or lesser rolls in continuing the decline.

There are many reasons, but I will start with a couple of significant ones:  In order to walk on land, for any longer than a few minutes anyway, the salmon would need to be able to breathe air directly—something they cannot do with gills.  Lungs would be needed!  Also, their fins are not adapted for supporting their entire body weight on land (not long enough or strong enough) which would make walking problematic as well. 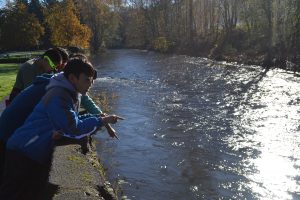 Why do different species of salmon come back at different times of the year? – Emerald Park Elementary 4th grader

Many reasons contribute to the variability we see in return times. A given salmon population will adapt to the local area regarding the characteristics that would be most important to their ability to migrate to the ocean, return from the ocean to their natal streams, find appropriate mates, and leave viable offspring. Some areas are warmer or colder at various times of the year, with more or less ice cover in the winter. Ice melt and levels of stream flow also come at different times of the year. The eggs need to hatch out at a time when they won’t just be washed away in extreme currents, and also have sufficient food to keep them alive. They also need to have enough water in the rivers to support their migrations, both out to sea as smolts and back as adults, and that may be a seasonal thing as well.

Is there a way to shorten or prolong any of the stages of the salmon life cycle? – Renton High School student

There are ways to alter the timing of some stages of the salmon life cycle, to some extent, primarily by altering temperature and/or the amount of food given. For instance, often steelhead hatcheries (O. mykiss) end up compressing the initial ~2 years of freshwater rearing into a single year, in part because it’s significantly less expensive to raise fish for 1 year vs. 2 before release, and also because in many hatcheries it’s not feasible to keep the water temperatures low enough year-round to slow their growth enough to allow the parr to take a full 2 years to get to the smolt stage. In a natural setting, these fish would usually take 2 (if not 3) years to develop in fresh water before migrating to the ocean as smolts. There are some steelhead hatcheries experimenting with producing the more natural 2-year smolt, however (instead of the more frequently produced 1-year smolt), as they are finding that ultimately survival rates are increased in 2-year smolts.

But we clean the salmon before we eat them, are they still polluted when my family eats them? – Hilltop Elementary 4th 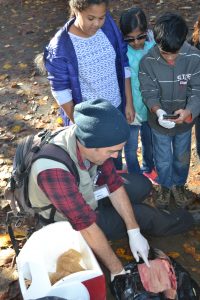 Cleaning the outside of the salmon is always a good idea, to get rid of any bacteria. But the pollutants that are found in some salmon come from their diet and so are absorbed into their bodies, just like vitamins and nutrients from the food we eat and can’t be washed off.  But there are guides like this one (http://www.doh.wa.gov/CommunityandEnvironment/Food/Fish/ReduceContaminantExposure) from the WA State Department of health, on which fish have low pollutants, and other information.

How can we keep fecal coliform out of the water? – Renton High School student

Most large municipalities have sewage treatment plants to strictly control for harmful substances, such as fecal coliform entering our water.  However, during storm or flooding events, these systems can get overwhelmed and can over flow releasing untreated sewage, but luckily these are rare occurrences.  Other sources of fecal coliform include pet and livestock waste.  Here increasing awareness of owners of the potential risks of fecal coliform and importance of proper disposal, would be one way to prevent it from entering our water.

Storm drains have been an integral part of city infrastructure for a long time. They function to keep roads and building from flooding after rain events since rain cannot soak through concrete and asphalt and into the ground beneath. An unintended consequence of storm drains is that they carry stormwater, which can be contaminated with toxic chemicals from our roads, houses, and businesses, directly into the surface waters (streams, rivers, lakes, and ocean) that are important habitats for fish and other aquatic species. Scientists are currently investigating how rain gardens, pervious road surfaces, and other technologies can reduce stormwater toxicity by letting stormwater drain naturally into the ground instead of directing it into storm drains and pipes that empty into the aquatic environment. Replacing all of the stormwater drains would be a huge project, would cost a lot of money, and would be very difficult to accomplish without a lot of public and political support. 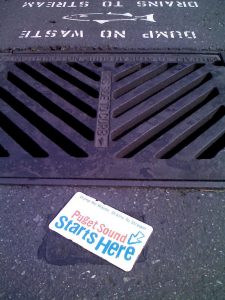 Why can’t we create a filter over the storm drain to clean stormwater? – Martin Sortun Elementary 4th grader

That is an interesting solution!  A current example of such filters can be seen at car washes where oil-water separators remove oil from wastewater before it runs down the drains. However, installing filters on the thousands of storm drains throughout the city, maintaining those filters, and safely disposing of them becomes an issue. Who would do that work, and more importantly, who would pay for it?  Perhaps in addition to engineering a solution to stormwater (i.e., installing filters) we can also think about ways of changing our behavior to reduce the amount of toxics entering stormwater in the first place (i.e., driving less).

How can we filter out contaminants? – Renton High School student

Scientists are currently investigating how rain gardens, pervious road surfaces, and other technologies can reduce stormwater toxicity by letting stormwater drain naturally into the ground instead of directing it into storm drains and pipes that empty into the aquatic environment. Research shows that letting stormwater drain naturally into the ground can be a highly effective method of reducing toxicity to fish and other aquatic organisms. In order for these technologies to be effective, scientists also have to consider the geology of the underlying ground. For example, the soil in Seattle contains a lot of clay, which is not good at soaking up water and can contribute to landslides.  In addition to inventing technology to filter toxics out of the water, perhaps we should also consider ways of changing our behavior to reduce our chemical footprint (e.g., driving less, using fewer chemicals around the home, buying organic food,…).